– unique femininity and bold playfulness, so typical for all women. 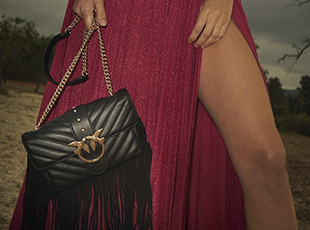 SKIRTS,
dresses, jeans, jackets, and shoes are not banal or ordinary. 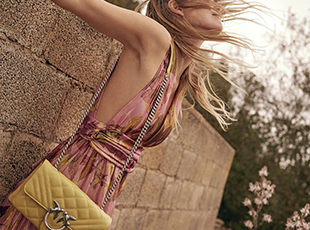 AMONG THE DISTINCTIVE
Pinko features there are all kinds of interesting details such as embroidery or fur inserts.

"This line will be the perfect union of incredible design and extremely wearable and affordable women's clothing."
Pietro Negra

In 1979 Pietro Negra and his wife Christina Rubini officially registered the company Pinko in Fidenza Italy. Since its inception, the company began producing stylish women’s outfits for every day (dresses, sweaters, jackets, down jackets, etc.).

Pinko has made new developments in the fashion-industry: original decorations, use of hand embroidery, and created luxurious fur coats.

At the end of the 1980s, Pietro Negra and Christina Rubini created the holding group CrisConf SPA and Pinko became a part of it.

By the 2000’s, Pinko became known in many European cities and in the United States. The products of this company were different due to quality materials, original decorations, and impeccable cutting. Jackets, dresses, and sweaters were very popular.

In 2009 the company made an agreement with designer Mark Fast, a graduate of Central Saint Martins College of Arts and Design. According to this agreement, Fast created two Pinko collections for the autumn-winter 2010/2011 and spring-summer 2011.

In 2012, the women’s collection, autumn-winter 2012/2013 brand designers turned to one of the main trends of the season – no high collars. Outerwear was represented by fur coats, coats, and jackets with a shallow U-shaped neckline.

In 2013, Pinko boutiques were opened at Via Montenapoleone, 26 and Corso Venezia, 5 in Milan. The walls were equipped with the latest huge plasma screens and customers could look at the image very closely, as well as choose the color and size of the dresses, skirts, jackets, and trousers. The boutique is called a Hybrid shop.

In 2014, the brand produces women’s and children’s clothing, shoes, and accessories. More than 750 multi-brand boutiques are opened around the world. The 15,700 square meters Pinko’s factory is located in Fidenza.

There are many famous people among the fans of the brand but scandalous model Naomi Campbell should be mentioned particularly. She embodies the emancipated sexuality and spontaneity of the collections. Devoted fans of Pinko are Paris Hilton, Eva Herzigova and Mariah Carey.