It is not just clothes that make you feel warm and cozy, it is a magnificent combination of   the highest quality, incredible comfort, and unique incarnation of design style.

THE LINE OF ACCESSORIES
– hats, gloves, scarves and universal quilted jackets – are a complementary element to the main clothing collection. 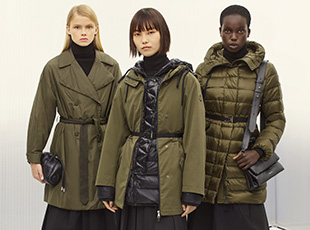 MONCLER SHOES
protect against snow and moisture, are durable and functional, and safe to use.

MONCLER OUTERWEAR INCLUDES
jackets, down jackets, coats and suits of all kinds and styles. 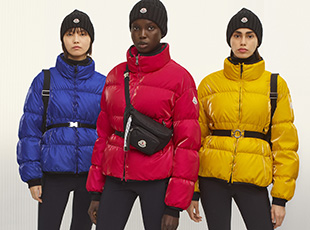 "Unbelievable! With the help of Moncler in the mountains it is now possible to go beyond the currently known features of the human body. "

There are a lot famous icons among the fans of Moncler- Brigitte Bardot, Madonna, Sarah Jessica Parker, and Victoria Beckham.

1954. The first down jacket was created. Lionel Terray, the famous French climber, played a key role in the history of this brand. He was the first who appreciated the quality of the Moncler down jacket. By his request, the designers of Moncler created and developed warm jackets, gloves and sleeping bags for climbing at high altitude

1960s. Moncler became very popular with celebrities. During the Winter Olympic Games in Grenoble in 1968, Moncler was the official supplier of the French national downhill ski team – the future winner of these games.

1968. The brand registers its logo: an image of Eguit Mountain and the French rooster – the symbol of France.

1972. The French Olympic ski team requires a new model of down jacket: more practical, bright and more comfortable for competitions. Moncler creates the “Nepal” jacket with leather patches on the shoulders to protect the fabric during skiing. This jacket becomes the most successful model made by Moncler. Down jackets by Moncler became a mass phenomenon and a cult in the world of fashion.
1980-1999. Moncler achieves the status of a fashionable brand.

Many different models of jackets and coats are created: jackets with unusual horizontal and vertical stiches, bright fluorescent colors, and are made out of the highest quality Japanese nylon. Moncler becomes a trendsetter for many seasons and starts to cooperate with famous fashion designers. Chantal Thomas, the first fashion designer who cooperated with Moncler, replaced the zippers with buttons, and added fur.

For the first time a “pret-a-porter” Moncler collection is shown in Paris.

2002-2008. Italian businessman Remo Ruffini purchases Moncler in 2003. He becomes Moncler’s new president and creative manager and makes some experimental steps to change the brand through cooperation with fashion designers such as Nicola Ghesquiere, Junya Watanabe, Yohji Yamamoto, Alessandra Facchinetti, and Fendi.
The first Moncler boutiques are opened in Paris and Milan.

Moncler Gamme Bleu – is not just exclusive and beautiful but also very functional. This season the Gamme Bleu collection is full of checks, strips, shorts, hats, flight suits, and many other items.

Moncler likes to surprise its fans. For example, a recently held a Moncler fashion show that took place right in one mall in New York. People dressed in Moncler jackets, merged with the crowd of buyers and at 19:00 lined up in the lobby and began to dance. The spectacular show attracted a huge number of viewers.

2014 Moncler is represented in more than 90 boutiques worldwide.