ALEXANDER WANG
and his team managed to do the nearly impossible: win the hearts of the famous New York It-Girls, surprisingly demanding American customers, and make sophisticated fashion editors fall in love with his designs. 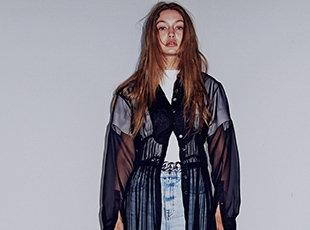 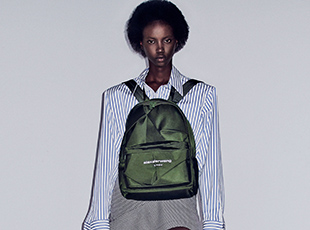 ON RUNWAY
Wang’s models do not defile, they are in a hurry – go fast, do not smile or pose, no affectation, coquetry or games for the public. Their images are clear, distinct and accurate.

“It would be great, of course, to creat complex and intricate garments; but what’s the point if you cannot wear them every day.”
Alexander Wang

Alexander Wang was born in 1984 in San Francisco. Since his childhood, Alexander developed an interest in sewing and design, having taught himself to sew when his mother bought him a sewing machine. At the age of 15 he created his first “collection” that consisted of 35 looks for his brother’s wedding.

Alexander Wang’s aesthetic is an embodiment of the philosophy of the big city.

When he was 18 years old, Alexander moved to New York to enroll in the famous Parson Design School. He trained at the Marc Jacobs and Derek Lam fashion houses. At the end of his second year Wang started creating his own collections and soon he was expelled from school for poor grades.

In 2005, the designer officially registered the brand Alexander Wang. In his interview he repeatedly pointed out that a friend inspired him – a model Erin Wasson – who often appeared in public wearing dresses designed by Wang.

In 2007, Wang showed a full collection of women’s knitwear at the New York Fashion Week.

One year later an accessories line was introduced and Wang won the CFDA / Vogue Fashion Fund Award (Council of Fashion Designers of America) and $200,000 for the development of his business.

In 2009, the designer launched a line of shoes and also presented his second women’s wear line, T by Alexander Wang, a more democratic look compared to the main line. Later he launched a menswear line.

Alexander Wang brand is not only a talented designer but a team of people (more than 100) who are engaged in other art forms, related to fashion.