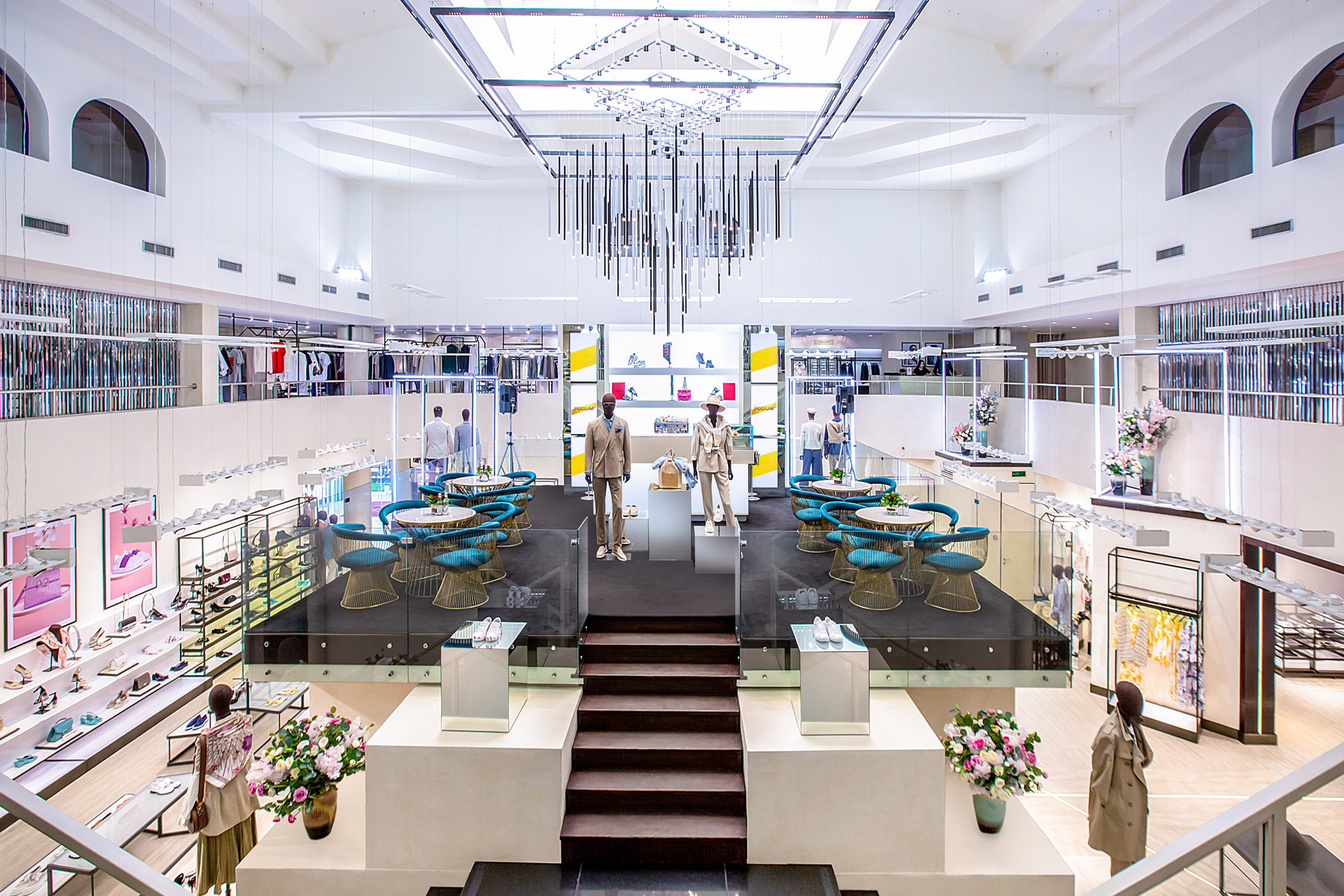 “To be in the trend” – what do these words mean today? Modern fashion is not just a trend and the silhouettes of the season, it is a whole world that includes not only the ability to look exactly like the photos in a fashion magazine, but also to create an individual image, characterized by a unique look for your own appearance, highlighting the rich inner world.

All you need to become a true fashionista is located in the heart of the capital and is called Podium Italia. This name is well known in Tashkent. Our boutiques have provided the most significant collections of the world famous couturiers to the most demanding customers over the years.

The Interior Podium Italia boutique on the Khamid Alimdjan square is designed according to the best European traditions.

The Interior Podium Italia boutique on the Khamid Alimdjan square is designed according to the best European traditions: frosted glass of noble color, a two-floor hall, weightless stairs of a transparent material, a cozy bar, as if it is floating in the air: everything creates a sense of lightness, luxury and the amazing atmosphere of a real fashion place.

Sophisticated but laconic decor is reflected in the noble shade of a tree – dark and saturated shelves, sandy floor tones, and matching tones in the curtains and furniture. 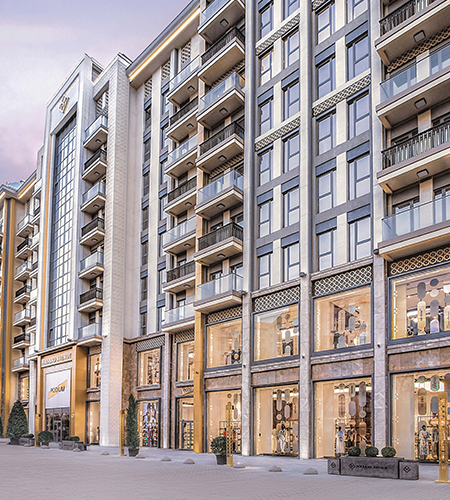 Organicly blended into the busy life of the capital, Podium Italia is a territory of the finest European fashion, with carefully selected seasonal collections, highly skilled sales consultants, and an individualized, non-intrusive approach to each client.

Podium Italia established its status in the perfect balance between elegant and luxurious classics and the latest trends, literally ripped from the “pen” of the authoritative couturier by the experienced buyers of the company. 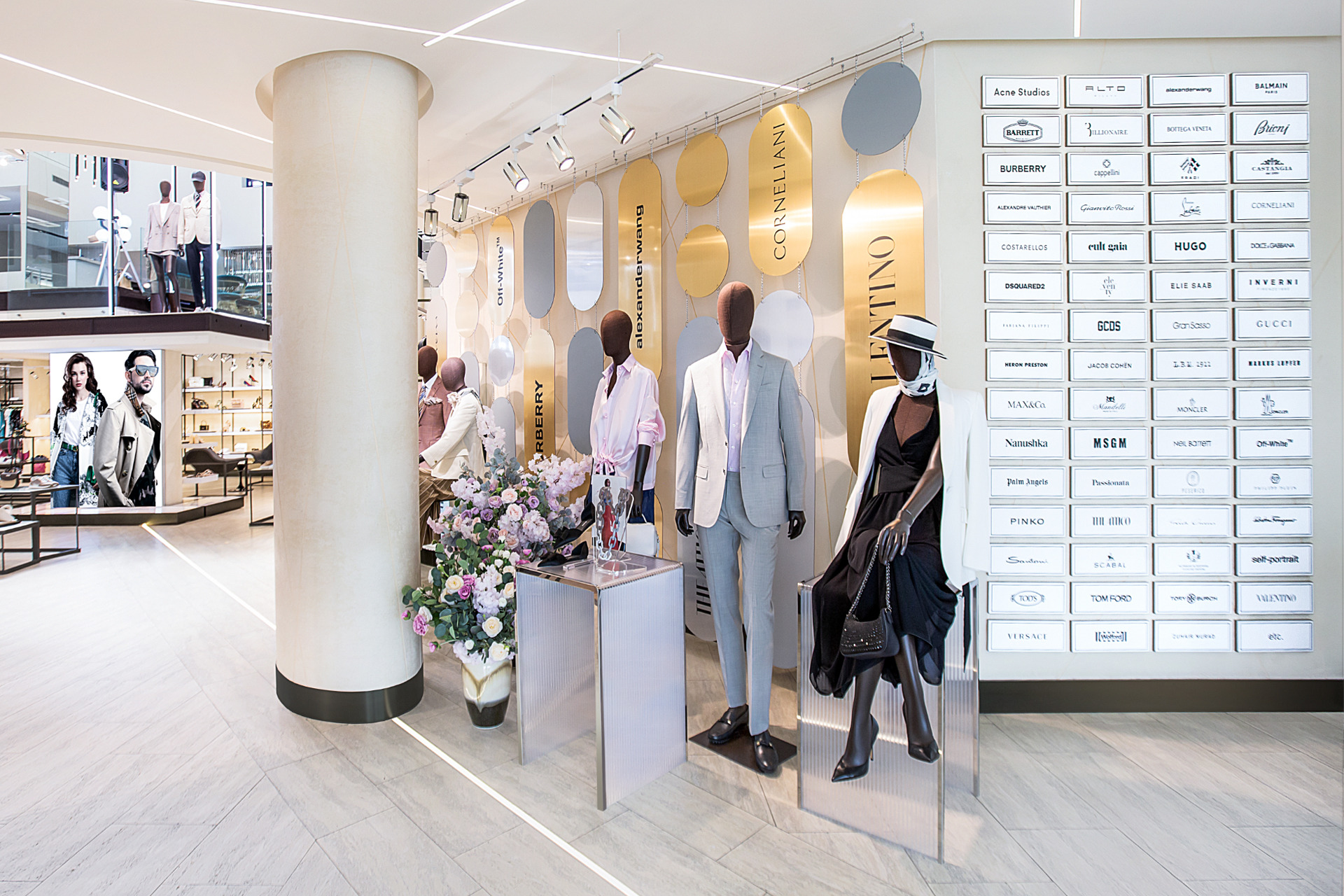 1999 – 2001
The first boutique of the company was opened in the “Arcada” mall in 1999 and offered footwear and accessories from the famous brands: Byblos, Vicini, New Style, Casadei, Nando Muzi, Loretta Pettinari, and Loriblu.

Later, women’s clothing appeared in the boutique, followed by opening of a menswear store. The list of brands was enriched by companies like Ungaro, VDP, Bati, Maria Grazia Severi, Torras and Lubiam.

In 2001, mono-brand boutique Fabi was opened.

In 2004, a second boutique was opened on the Khamid Alimdjon square.
Offering the collections of world famous designers such as Armani Collezioni, Rosco Baracco, Valentino, Salvatore Ferragamo, Bally, Iceberg, Corneliani, Givenchy and others. 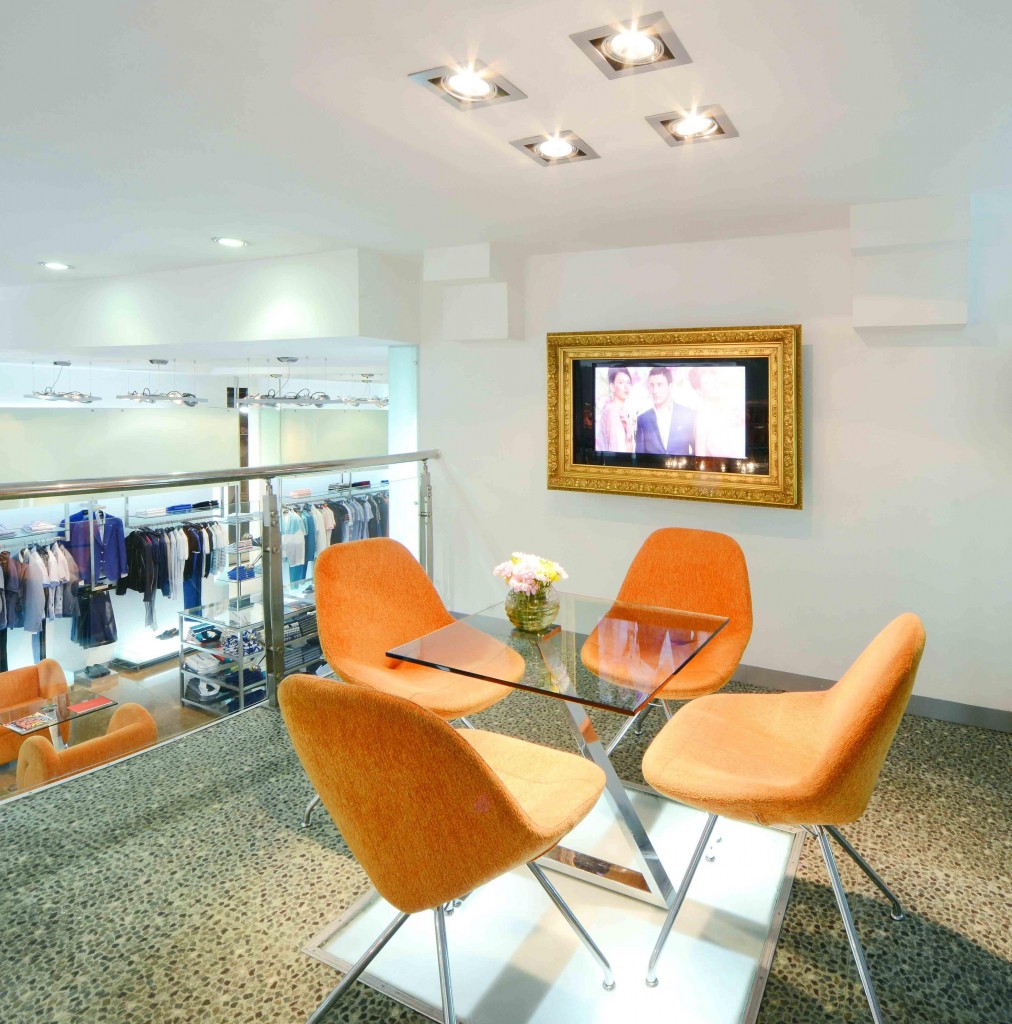 In the autumn of 2008 a new multi-brand boutique was opened in the “Arcade” mall where pret-a-porte and secondary lines of luxury brands were presented.

Also two Stock Centers – women wear and menswear – were opened where the “previous seasons” of the luxury fashion houses’ collections were on sale.

The list of companies presented in Podium Italia boutiques was enriched by new names:

2009 – 2011
Podium Italia introduces the new names to its clients: Billioniere, Chapurin, Corneliani, Gianfranco Ferre, GiambattistaValli, Gran Sasso, Maria Grazia Severi, Marni, Maxime Simoens, Moncler Ralph Loran, Sergio Rossi, 7 For All Mankind, Santoni, and St John.In early 2010, Podium Italia was awarded with the Business Initiative Directions prize “Quality Era” as the most popular and successful company in the fashion- industry, and received the prize in the category “Platinum” – as a result of the development and professional growth of the company for several years.

In 2014, another two companies presented their collections: Patrizia Pepe, Fay, G2G and Y-3.

The unique concept of the shop is an arrangement for long and comfortable shopping based on zoning, the convenient level of fashionable selections – from classics to streetstyle.

The womenswear zone of the Department Store is located on the first floor, uniting the premium segment department, trendy brands, and lingerie zones. The men’s department is located on the second floor and also divided into luxury and contemporary clothes departments as well as a separate Billionaire brand corner. There is a large accessory zone here as well.

Starting this season, we are presenting the new collections of the cult brands – Gucci, Balmain, Givenchy, Dolce & Gabbana, and Bottega Veneta.

The fusion of fashion, music and art on the occasion of the 20th anniversary of the biggest luxury retail group in Uzbekistan took place on July 3, 2019 within the magnificent interiors of the State Academic Grand Theatre named after Alisher Navoi in Tashkent, the capital of Uzbekistan.